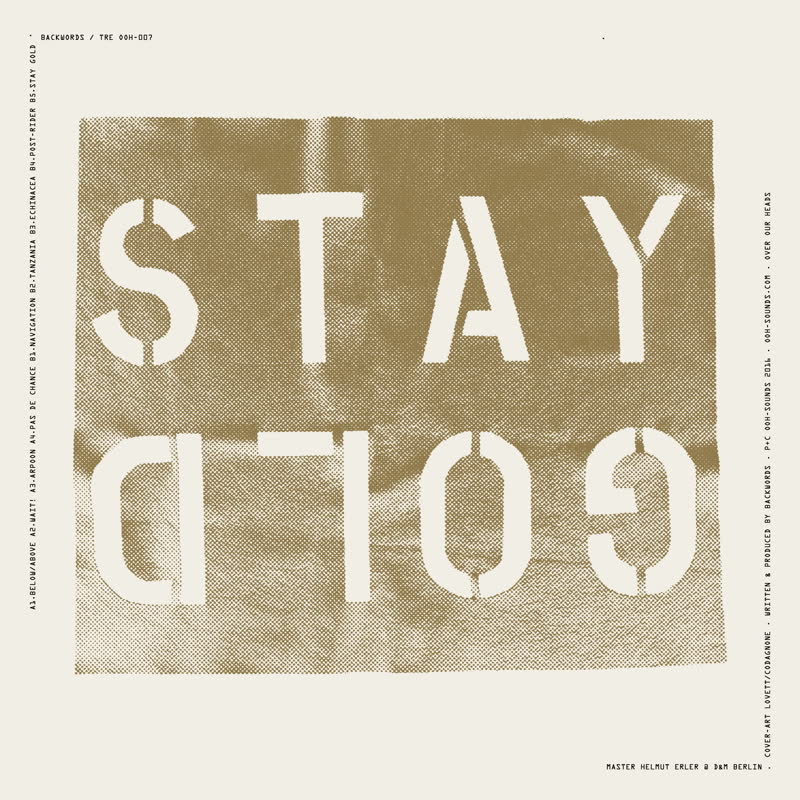 Tre,the third release from Italyʼs BACKWORDS (uno,due, tre),is an intimate, muscle-and-sinew- deep exploration of the mysterious meeting point of man and machine – here, Pardo (Michele Pauli to his mother) and vintage synths, drum machines and miscellany from the second half of the last century. Twitchy beats, crackling textures and layers of tape distortion conjure a hallucinogenic universe that owes as much to heavy dub as it does to the techno-futurist optimism of the early modular synth pioneers.

Static fuzz, sandpaper hisses and percussive clangs are cloaked in analogue warmth from a 1970s ex-BBC Amek BCII, Roland TR-808, Moog Prodigy and a warehouse-full of others. Behind their knobs and switches, spirits come alive – a synthesiserʼs strangled gasps and yelps punctuate a rhythm; ghostly mallets bounce off overstretched strings; a ratchet is tightened by an unseen hand; imagined rin bowls echo endlessly. Woozy looped basslines and distorted vocals suggest, in fleeting glimpses, the shadowy figure from whom all of these sounds flow.

"My perception of music, and also my compositional approach, is of an intimate process that is strongly connected to an image of a bigger body, a complex ecosystem," Pardo says. "I want to be provocative to a certain degree – Iʼd like the audience not to always be at ease. A bit like Peter Handkeʼs pieceOffending the Audience".

Recorded over a period of two years,Tre is haunted by the ghosts of musicians who have inspired it, as well as more literal apparitions. Below/Above and Arpoon begin with one "movimento" before slipping into another, approaching different time/space perceptions and juxtaposition of various timbres and sounds with playful experimentation similar to Beatrice Dillonʼs music. Pas de Chance clashes old samples against new granular synthesis sounds, glitches, crackles and sequenced acid bass trying to find a meeting point between alien elements. Tanzania is a first take improvisation, simple and wild, in which synths signals are sent through an EHX 16Second Delay and white noise is abruptly fast-panned reminding of Oliver Coates' Entropy One. Echinacea recalls Laurel Halo's Chance of Rain, slight but precise techno rhythmic texture contrasts with a weird but square, deep synth bassline. Post-Rider builts on a couple of piano chords and noises with very intense and dramatic texture that slowly developes into a more open and hopeful finale.

A set of outsider-ish visions of current sound system music....Tre bucks and roils with the terse, dubsteppers’ bounce of UK techno producers like Beneath and Batu,.. has an eerie, spaced out majesty reminiscent of Livity Sound or early Italthrash and shudder like a low budget Emptyset (a compliment), gracefully self-seed in a manner that evokes Rhythm & Sound - Rory Gibb the Wire

The best thing about this project is the elegance with which Backwords elaborates a compositional memory that ranges from granular synthesis to analogical machines, from dub roots to techno explorations. - Noisey